About the 2018 PacRim Yacht Challenge in Tauranga 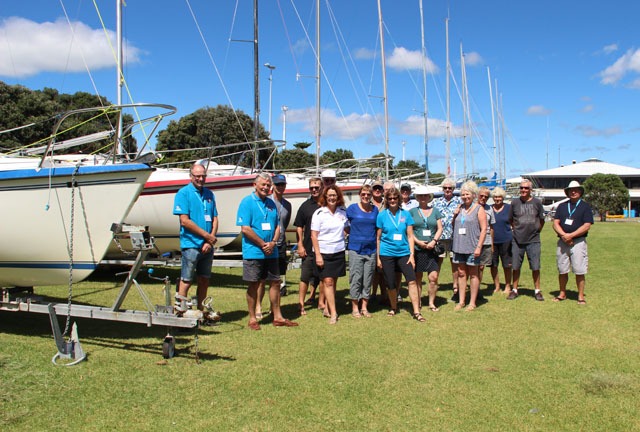 March 2018 was the third occasion TYPBC has hosted the Pacific Rim regatta since its inception in 1990.  The Port Stephens yacht club in Australia hosted the regatta in 1992 and offered TYPBC the opportunity to be the New Zealand representative club and to send a team to that event.  That first team included Ross Currie, Bruce Goodchap, Fred Jeanes, Brian Peterson, Stuart Edgar, and Neville Kennedy, and was organised at very short notice.  TYPBC has been represented at every regatta in this bi-annual event since 1992.  TYPBC previously hosted the PacRim regatta in 1996 and 2006.

The PacRim regatta is not just a competitive sailing event; it is very much a social and cultural event in which visitors are home hosted within the local community.  Tauranga again proved to be a popular venue with full participation from representative clubs in all five countries; Port Stephens, Australia, Victoria, Canada, Tateyama, Japan, Nakhodka, Russia, and Bellingham, United States.  TYPBC hosted a total of 96 visitors with Australia sending the largest team (24 members).

A huge amount of effort went in over the eighteen months preceding the event.  This included arranging the home hosting, sourcing the 13 Noelex 25 yachts for the event, planning the opening and closing ceremonies, a mid week dinner and auction evening, the onshore cultural activities, and planning and organising daily lunches for the crews and race management.

The social events were well attended by our visiting ambassadors.  The Wednesday lay day included a bus excursion for sailors and ambassadors to the Mataatua Marae in Whakatane.  The marae visit included learning and performing haka (tane – men) and poi dance (wahine – women), and a digital light show incorporating the history of the meeting house.  The experience concluded with a seated lunch to enjoy the hangi, put down that morning, with our team thanking our hosts with a waiata (song) to finish the day.

The racing format included two one design Noelex 25 boats per team thereby enabling eight crew per team to compete, and for their combined scores to apply.  The first day of racing was held outside the harbour and this proved successful for the Tauranga team, with results of a 1st and 2nd for the red crew and a 3rd and 4th for the green crew, giving them a slight advantage over the Australian team with a 2nd and 5th and a 4thand 7th.  While this was the good news of the day the racing was unfortunately marred by a serious incident in each of the two races, one collision and one sinking.  Fortunately, no injuries occurred in either incident.  At the time of writing, all boat repairs have been completed to the owners’ satisfaction and TYPBC are working to progress options with the owners of the sunk boat.

On the second day, the race committee made the call to change the race format to a six-boat regatta (one boat per team).  The teams and the yacht owners were happy to continue the regatta inside the harbour, but with the wind limits exceeding the 23-knot maximum on the second and third days, and a planned lay day on the Wednesday, racing did not resume until the Thursday.

Race Officer Warren Belk and his team did a great job of ensuring four races were sailed that Thursday.  The teams welcomed the option of changing crews after race 2.  Our Tauranga teams each sailed two races that day and did a great job to stay just in front of a very quickly improving Canadian team who had concentrated their top four sailors to one boat.

Friday’s final race day forecast suggested the likelihood of light airs for the first race with wind forecast to build slowly through the day.  It was decided at briefing that morning that only two races would be sailed on the final day.  The Tauranga Team were happy to be sailing a local boat they had used for practice but in race one they finished second to the Canadian crew, who sailed a flawless race from start to finish.  This result left the New Zealand crew with just 0.6 of a point in the lead with the realisation that there was just the Canadian crew to beat to win the regatta.

The breeze had freshened a little more for the last race and in the prestart this time the Tauranga crew ensured they were in close contact with the Canadians, who also had the Australian boat dictating their options for breaking away to the lay line.  It was a fortunate break for the Tauranga crew who had the advantage to break for the line first of the three boats, a little late for the start but with relatively clear air.  With a two-boat length advantage on the Canadians off the line, and now marginally quicker in the freshening breeze, the New Zealand boat stretched away from both the Australian and Canadian crews to finish 2nd behind the Russians (who gained their second line honours for the week).  Australia placed 3rd and Canada 4th.   The courses for both those races were set relatively close to the TYPBC northern deck.  This enabled a big crowd to watch and it was great to hear the cheering as the team ran downwind toward the finish for the overall win.

One of the Tauranga crews was skippered by Paul Sloane, with crew of Delwyn Keyworth, Sharon Stewart and Leslie Goddard, all of whom have represented our club at previous PacRim regattas.  Ross Currie skippered the second team with crew of Grant McMillin Lisa Knapton and Ray Carter, all of whom competed in Bellingham in 2014.  The crew members were also part of the organising committee, chaired by Fred Jeanes.  Other committee members were, Fiona and Bruce Harrison, David Goddard, Ray Finlay, Ross Sheerin, Leisa Managh, and Wayne Hunter.

The race committee was headed by our new Commodore, Andy Knowles, assisted by Warren Belk, Nigel Rippey and Graeme Burton (Protest Chairman), and John Buck (who made his launch available as a committee boat for the outside racing).  David Peat was of great help assisting with repairs during the week.  TYPBC can be most proud of the many other volunteers who assisted.  Special thanks go to Club Manager Lynne and her team.

The Noelex 25 owners were incredibly generous in providing their boats and, without a doubt, this was key to the success of this regatta.  Many thanks to them, and to the home hosts who were so willing to accept visitors into their homes.  Wayne Hunter and his volunteers deserve a special mention for managing the lunches and catering.

There are of course others who gave their time and energy to make this a successful event for the Club.  Our thanks to you all; we couldn’t have done it without you.